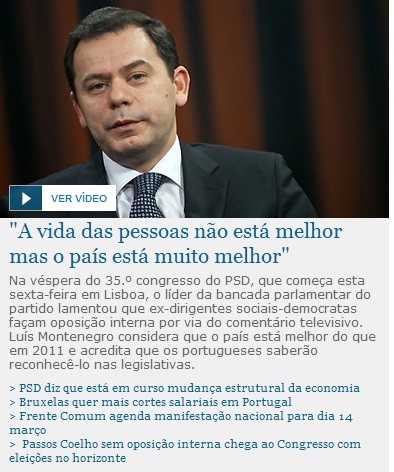 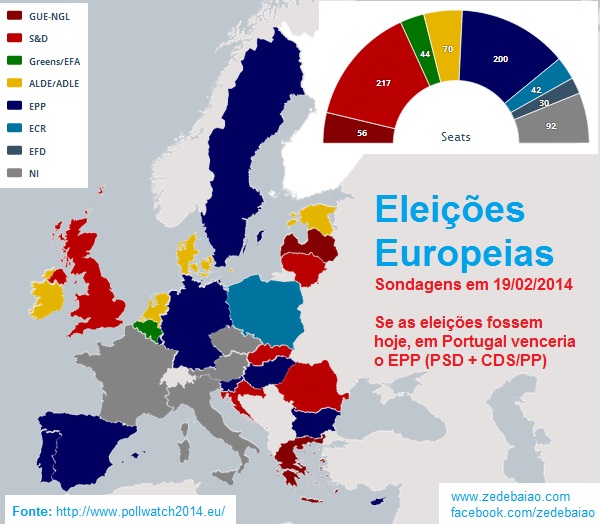 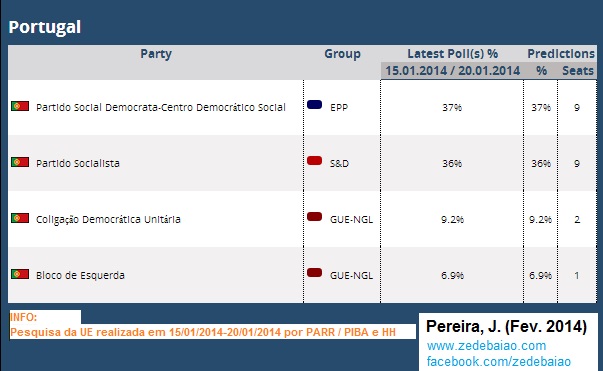 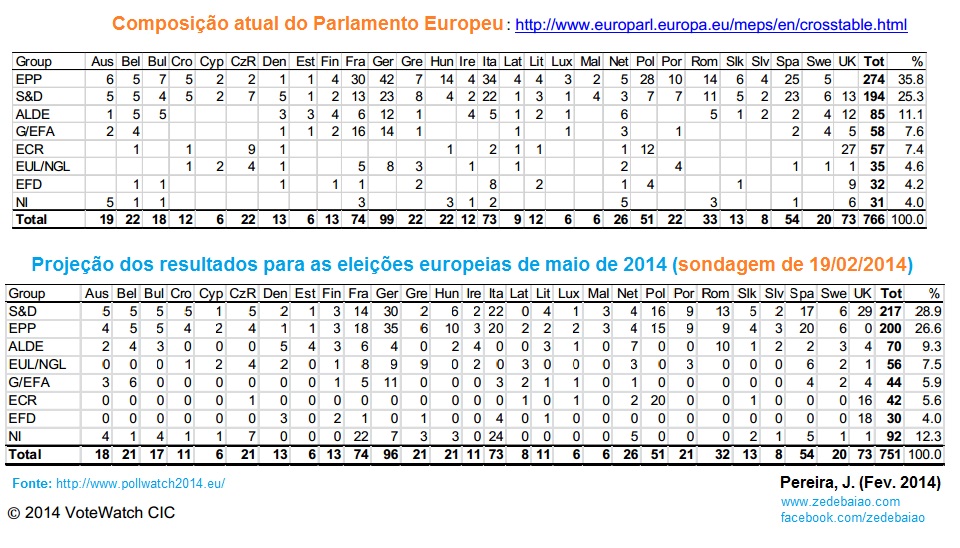 WHO WILL WIN THE EP ELECTIONS ?

The centre-left Socialists & Democrats (S&D) are slightly ahead of the centre-right European People’s Party (EPP) in the race to be the largest group in next European Parliament. Today PollWatch2014’s forecasting model predicts that in the May 2014 elections S&D will win 217 seats while EPP will win 200.

The next European Parliament will also be considerably more polarised than the current one: with fewer seats for the centrist groups and more seats for the radical left, radical right, and anti-Europeans. The combined seat-share of the three centrist groups – EPP, S&D and the Alliance of Liberals and Democrats for Europe (ALDE) – is likely to be down to 65% (from 72% currently), while 29% of the seats are likely to be won by parties that are either critical of or radically opposed to the EU: in the centre-right/anti-federalist European Conservative and Reformists (ECR), the Eurosceptic Europe of Freedom and Democracy (EFD), the radical left EUL/NGL, and the non-attached (NI) members.

On the battle to be the largest group, while the difference between S&D and EPP in our forecast might seem quite large, we remain cautious about the group that is likely to be the largest in the European parliament. There are two reasons for this. First, support for these two larger groups depends significantly on the fortunes of a small number of large parties in Germany, France and Italy, the support for which has varied considerably. Changes in support for parties in these countries will greatly affect the overall make-up of the European Parliament. Second, with 12 weeks until the election on 22-25 May, European election opinion polls will not fully reflect final voting intentions which will depend on the nature of the campaign fought over the next 12 weeks. As such, the accuracy and relevance of the polls are likely to develop as we get closer to the election.

Our forecasting model combines two elements: (1) where European election polls have been taken in a member state, we simply take the standing of parties in these polls; but (2) for member states where only national election polls have been taken so far, we apply a statistical model of how these national election poll standings in the past have translated into European election outcomes. In 2009, this approach correctly predicted 720 of the then 736 seats won by each political group (a 98% success rate), and 660 of the seats won by each national party (a 90% success rate).

However, both elements of our method have a level of uncertainty. Using standard ways to estimate this uncertainty, the “confidence interval” around the current standing of S&D and EPP with 12 weeks until the election is about +/- 25 seats each. Also, given the situation of Socialists in France, Germany and Italy, the uncertainty is probably slightly larger for the Socialists than for the EPP and may also be lop-sided – where our current estimate is towards the upper end of the interval. Given these factors, the Socialists are likely will win between 190 and 230 seats while the EPP are likely to win between 180 and 225 seats. Put this way, there is a reasonable chance (approximately 40%) that the EPP might end up being larger than the Socialists come May.

The forecast that the next European Parliament will be far more polarised than the current one is more certain. What is not yet clear in this regard, though, is where all the MEPs from new political parties will sit and whether new political groups will form. We have assumed at this stage that the MEPs from parties who are not currently affiliated to a European party or group will sit as “non-attached” members. For example, we do not yet know where the Italian Five Star Movement (M5S) will sit, and we expect it to win 18 seats, or the Czech Action of Dissatisfied Citizens (ANO), who we expect to win 9 seats. As we get closer to the elections, we may be able to assign more of these new parties to groups.

There has also been media coverage of a possible new group on the radical right, formed by the French FN, Dutch PVV, Austrian FPÖ, Belgian VB, Italian LN, Swedish SD, and perhaps some other parties. In our first forecast we have left the MEPs from these parties in the groups in which they currently sit. But, if these parties were to form a new group, we are currently predicting that they will win 37 MEPs from 6 member states – which would meet one of the two legal thresholds for forming a group (of at least 25 MEPs from at least 7 member states).

If a new radical right group forms there would be 4 political forces to the right of the EPP: the conservative ECR, the Eurosceptic EFD, the new radical right group, and the remaining non-attached members (many of whom are on the extreme right, such as Jobbik from Hungary and Golden Dawn from Greece). Such a large number of MEPs and groups to the right of the EPP could transform politics inside the European Parliament, as it would force the centrist groups to work together in a “grand coalition” – starting with the choice of the next President of the European Commission. A large populist Eurosceptic bloc of MEPs could also influence the policy agenda of the next European Parliament, as this bloc would probably be opposed to deeper Economic and Monetary Union, fully open free movement of people, and a free trade agreement between the EU and the United States.

Between now and the European Parliament elections in May, PollWatch2014.eu will produce a series of forecasts of the number of seats each national party and European political group will win in the elections. Our first set of forecasts are published today and our next set will be published in two weeks.